Published on May 2, 2012 by Brett Henderson | Leave a comment 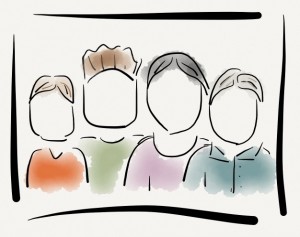 I saw this great tweet the other day and it got me thinking about how we label people within our work place.

How many times have you heard the people in a development team referred to as “resources” but then heard the developers refer to management and sales teams as “the business”? It seems to me that we all suffer from a need to make people outside of our group “faceless”, but at what cost.

Over the years I’ve heard developers use the term “the business” when talking about the people outside of the development team and as a manager, I constantly hear developers or employees referred to as “resources”. We even use the term “resource management”.

Now I understand that when planning a project, it’s simple to bundle people along with hardware and software into your resource list to determine what it will take to complete. However people aren’t interchangeable in the same way as other resources. You simply can’t locate another developer with the same or similar skills and expect them to be able to replace someone else without a significant cost to your productivity and success.

But what about developers using the term “the business”? Is this any better than a manager referring to developers as resources? No. By referring to the other people within the company as “the business” developers are creating “the enemy” that binds them together.They are forgetting that the success of a product spans many groups either side of the development team but that ultimately we are all working towards the same end goal, the successful use of our product by a customer.

In both cases this terminology may seem harmless enough but ultimately these are all people, with the usual raft of issues, strengths, prejudices and capabilities. By removing the humanity from the label, you are changing not only how you think of them, but also how you interact with them.