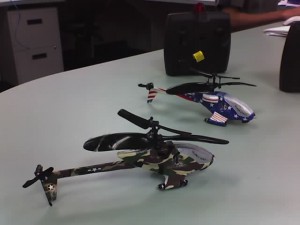 At Ephox we've always had a culture of fun and doing things as a team, it's one of the things that make this a great place to work.

We forage1 and mostly eat as a team, go to the pub Fridays for lunch, have beers at the end of the week and play alot. Along with the usual plethora of desktop toys, we have numerous "squishy toys" that are thrown around to get attention, we've played multi-user games like Unreal Tournament and brought in a Wii from time to time.

With some changes earlier in the year, kicking off development of a new product and lots of support from growing sales, we've been under a bit of stress lately and so some of these things have lapsed.

Last week Rob brought in two remote control helicopters he'd received for Fathers Day. These are about 17cm (7") long battery powered, infra-red controlled and a heap of fun to fly (though hard to control)

What surprised me was how they really ignited the team. Everyone had a go and encouraged and laughed with who-ever was trying to fly.

This, along with other indicators like returning to the pub has been a great sign that the stress levels are dropping. The work load hasn't diminished I might add, but the fun levels have increased.

Many people would be concerned at how much playing around a team like us do, however what I've observed (both here an in other places I've worked) is these sorts of teams work really hard. The play is a way to blow off some steam. It's this pressure release that helps alleviate stress as well as gel the team.

1 – Go out and find something for lunch.↩

This entry was posted in Hamstaa! and tagged Ephox. Bookmark the permalink.

One Response to Team Play-Time