Published on December 2, 2010 by Brett Henderson | Leave a comment 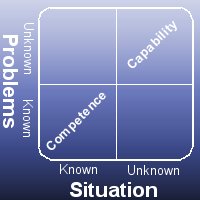 Back in 2007 I published a post about "Capability versus Competence" in which I espoused the virtue of Capability over Competence in IT and the difficulty in measuring it during recruitment but the value it can provide.

I recently had a comment on my original post. In it the author indicated that "Competence" in their opinion was far better.

As they put it,

Capability always indicate the “possibility” that the person have to do something, but may be he can not really do it.
“I have the capability of speak in Chineese because i have all the neccesary for this, but i can not because i dont know chineese language”.

Competence is always the capability but shown in practice, This is not the ” possibility” its real, practical.

While I agree, someone who may be capable of performing a task may not really be able to do it, in the real world of IT, there are many situation where limiting yourself to just a set of competent skills may be detrimental. For example, it may mean you overlook an outstanding developer with the right development mindset but not a particular language, who would be able to take you and your business along with the changing landscape in IT.

The other problem I have with the comment is the example. I don't believe you can draw a parallel between a spoken language and a computer language. For one thing, the grammatical rules or "syntax" of a spoken language are significantly larger and more complex than a programming one. Now while I can speak, I therefore have the Capability to speak another language, I don't yet have that Competence. However, I am Competent in many computer languages, and therefore have the Capability to quickly and easily master a new one.

In the IT world, competence does play an important part, but I believe if you rely entirely on that alone in your decision to hire someone then you are selling yourself very short.

This entry was posted in Management and tagged Leadership. Bookmark the permalink.