Pedaling is easy compared to paddling

Published on July 7, 2012 by Brett Henderson | Leave a comment 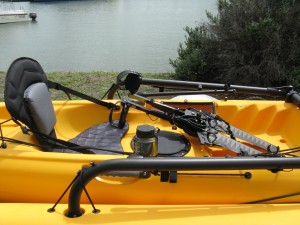 One of the features that drew us to the Hobie Tandem Island was the Mirage Drive. This unique propulsion system allows you to propel the kayak along using your legs instead of your arms.

In a recent article at Modern Kayak Fishing (formerly Yakass.net) on the “8 myths about Hobie kayaks” Josh discussed a number of issues people raise with Hobie Kayaks, including the Mirage Drives.

“Myth 8: I Can’t do That” is to do with a belief by some people that they aren’t fit enough to use the Mirage Drive.

Pedalling is a lot easier than paddaling, physically and technically.

We can certainly attest to that. On our maiden voyage we pedalled 5kms into an outgoing tide. There is no way we could have paddled that distance. With the Mirage drives however we did it and while both happy to stop, we were not completely exhausted.

The other distinct advantage of the pedal based system over regular paddling is that it is alot less likely you will injure yourself. The shoulder joint is much less stable than the hip joint, which means its much more prone to injury. In addition, the thigh and butt muscles are the largest muscles in the body. Much stronger than the shoulder muscles they allow you to travel alot further with less fatigue.

All up, the Hobie Mirage Drive is an simple, elegant solution that makes going somewhere in your kayak so much more enjoyable and less exhausting. If you haven’t tried one before, take one for a test drive. You’ll be amazed at how simple it is compared to paddling.

This entry was posted in SailYak. Bookmark the permalink.