Published on November 19, 2010 by Brett Henderson | Leave a comment 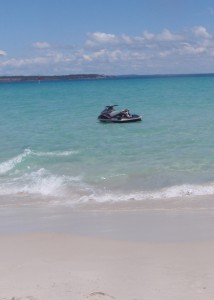 Sometimes a holiday is more than just the opportunity to see something new, or achieve some project at home, sometimes it all about you.

My wife and I recently had a two week break, the first holiday since Christmas last year. We had originally intended to do some travelling down into New South Wales, with some camping and walking through the National Parks, however at the last minute we decided to scale it down. What we did instead was spend the entire two weeks in Hervey Bay in a holiday house just minutes form the beach. We weren't there to Whale watch or see Fraser Island, but instead to do as little as possible.

While we were away, I read an article in the local paper that used the term "Mental Health Break" and I realised that was exactly what we were doing. It's been a big year for both of us work wise, so this break was needed to recharge the old mental batteries. Being away from home stopped the inclination to "just do X around the house". Being without internet access stopped the "I'll just check my email". Both us love to read, so with no distractions I was able to read 6 books, more than I've read in the last 18months.

So, if you have the chance, take a "Mental Health Break". It will leave you refreshed, re-focussed and ready to get back into it when you return.